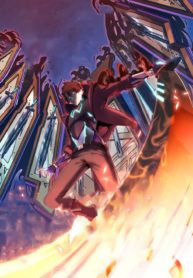 Living in the slums, Poor living conditions, there was was a zombie outbreak, his brother was infected by a zombie, the male lead Ling Wen Xing fought his was and brought his brother into the city for treatment, to have a sustainable life, he decides to join the zombie elimination squad, during life and death situations, he awakens super apocalypse system, from then on he killed monsters and grinded levels, walking on the path to become the strongest!