2-DOME NO KOI NO HAJIMARI WA 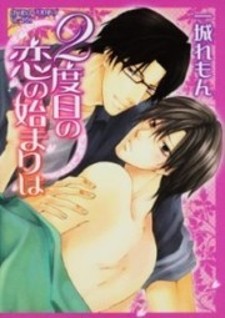 From Boys On Boys Love: 1-2. 2-dome no Koi no Hajimari wa After being harshly dumped by his lover, Kousaka Yuuki, a shop manager at a restaurant, swore that he would never love again. One day, he meets his ex again when he unexpectedly shows up at Kousaka's shop. It was then completely exposed to Matsuoka, a kouhai at work, that he dated a guy. Kousaka was shaken that his past was known to Matsuoka, and worried that he would look down upon him, but Matsuoka forcibly kisses him and says "I love you" to Kousaka...!? 3. Gekiai Honey Sasaki Ryoutarou, a part-timer at a restaurant leading an ordinary life, suddenly met his old classmate, Mio. Mio was once a gloomy guy ignored by all, but is now a cheerful, completely changed guy. He claims to have been searching for Ryoutarou to be his lover because he couldn't forget about him, even after being rejected a long time ago. Mio changed his style because he had heard that Ryoutarou's type is a cheerful person. Ryoutarou refuses to go out with him, to which Mio responds: "go out with me for a month, if you don't fall in love with me then I'll go back"... 4-5. Honey Trap You is in love with his best friend Shinji. Afraid of ruining his friendship with Shinji, he doesn't confess, and breaks off all contact with him. Three years later, running away from some stalker, he enters a building and asks for help. However, it turns out that the man living there is his ex-friend Shiniji, who is now a detective... But what will happen when Shinji suddenly asks You to be his lover? 6. Bokura no Koi no Hajimari wa - Extras Is a small continuation about the first story.

2-DOME NO KOI NO HAJIMARI WA